Don't wait to get sick!! 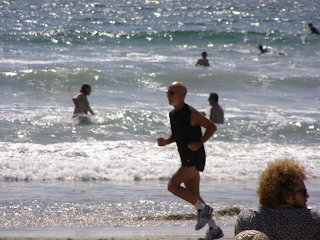 Neither health insurance companies or visits to your doctors office are going to keep you healthy.
You're going to keep you healthy by getting exercise each day and eating less food. This must be a priority as you pass 50 years old.
The way you eat and the amount of exercise you do will determine how healthy you are. If you do one hour a day of exercise and keep the quantity of food that you eat to a acceptable minimum then your doctors visits will only be for an annual checkup, which we all need.
As for health insurance they exist in case of emergency only!!
It's not hard to do and remember,
Keep it Simple, Consistent and Fun.
Posted by Fit Over 55 at 10:53 AM No comments:

Your gym is everywhere!! 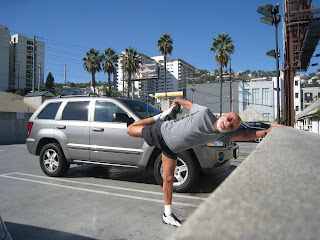 I took my friend to a pharmacy last week and what was to be a few minutes wait ended up being 1/2 hour. After seating in the car for ten minutes I got restless and decided to do some stretching in the parking lot, so for the next 20 minutes I did some stretching, squats and push-ups. Some people going into the pharmacy thought I was nuts but most gave me a thumbs up. By the time my friend came out of the pharmacy I was ready to get back into the car and head home feeling physically great.
My point is the following: No matter where I am I can be exercising. When having my car serviced instead of seating in the waiting area I take a walk, when going to the grocery store on a nice day I walk and take a backpack and I always ride my bike to anything within five miles weather permitting. So............
Keep it Simple, Consistent and Fun.
Posted by Fit Over 55 at 8:43 AM No comments:

Do the exercise you enjoy!! 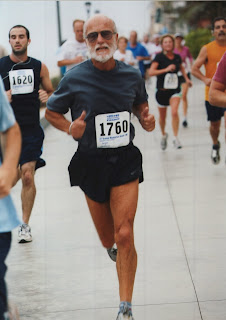 I've been a jogging and running since I was in my early thirties. When I turned forty years old I started running races, (5K's, 10k's, 1/2 marathons and marathons) because they were offered on a weekly basis thru-out most of So.Calif. It was easy, just sign up and show up so I did and my journey into the world of running races began. I loved it!!
Now thirty five years later I love running less. I went from twenty five miles per week to twelve. I began to have sciatica problems in my left leg. I was much more susceptible to nagging little aches and pains as I grew older. That's the bad news.
The good news is, I discovered that running helped build a strong core and endurance level that now allows me to do all the other sports I really enjoy, (tennis, weights, swimming, hiking, skiing, biking) with out injury.
My experience is enjoy the exercise or sport until it becomes an effort then simple switch to something else. There is nothing like change to reinvigorate oneself.
Keep it Simple, Consistent and Fun.
Posted by Fit Over 55 at 11:20 AM No comments: